Francois Villion arrived in 1671 at the Cape of Good Hope as a Huguenot refugee, who came from Clermont, France. His occupation is first given as that of “free wagonmaker”, and later “Free Burgher” (free farmer). He was married in Cape Town, on the 17th of May 1676, to Cornelia Campenaar, a young girl from Middelburg, Netherlands. In 1682 they received the farm Ida’s Valley near Stellenbosch from Governor Simon van der Stel, where Francois Villion farmed until his death in 1689.

The surname was initally spelled Villion (also Villon), and was later changed to the present spelling of Viljoen. Francois Villion was in fact the first Huguenot who settled at the Cape of Good Hope permanently. (Maria de la Quellerie, the wife of Jan van Riebeeck who founded the Dutch settlement at the Cape of Good Hope in 1652, was also a Huguenot, but she left with her husband and family in 1662). 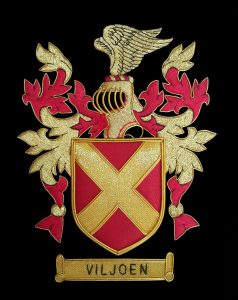 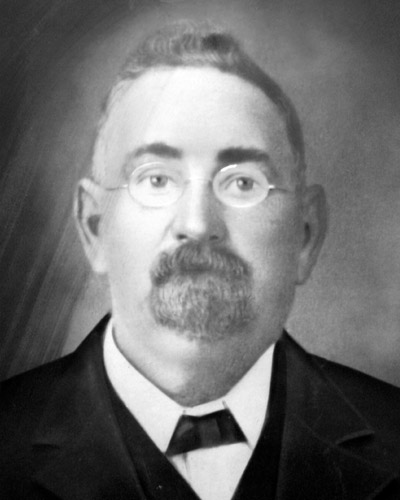 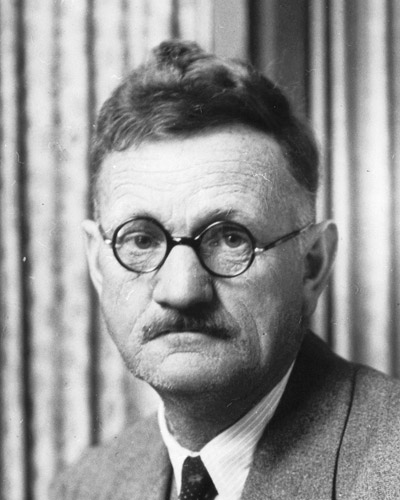 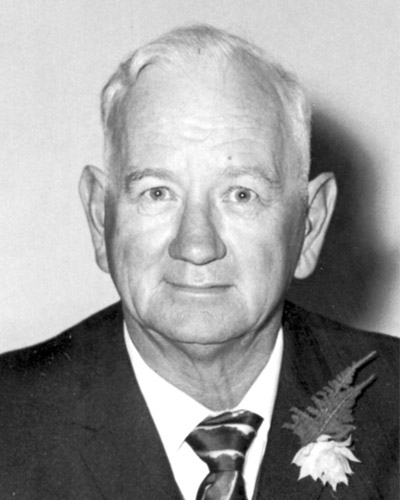 From an early age Harry had to help his farther on the farm.  Later the farm would be divided in two parts so that farther and son could each do their own thing (Gawie on Portion A and Harry on Portion B). 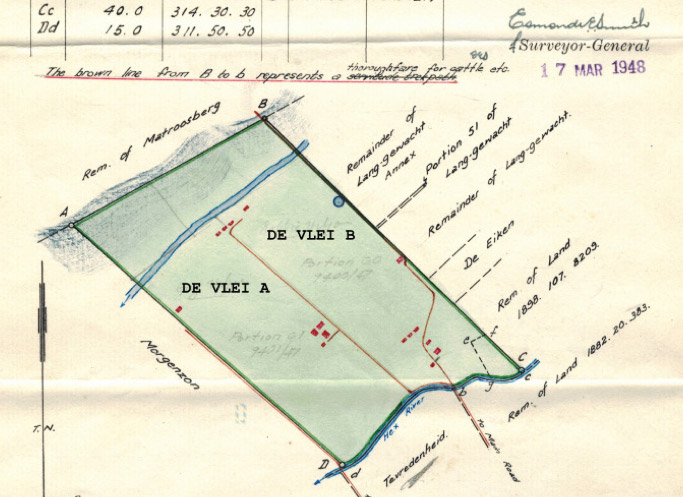 They farmed with a variety of fresh and dried fruit, vegetables and wine grapes.  Table grape varieties to make the long boat journey to Europe did not exist yet and exporting was not possible, it would only be possible after the introduction of tougher cultivars by Dr. Perold around 1918.  Harry was our first ancestor to grow grapes for export to England and Europe.

Gabriël Viljoen (HS son) finished school at 18 and started to work on the farm.  He had new ideas and wanted to trellis the vines while his father wanted to keep with the old way of not doing so.  It was decided that each should do his own thing and he rented De Vlei A from his grandmother.  He married Muriel (Molly) Dudgeon in 1939 and they moved into the house on De Vlei A.
(More about the Dudgeon Family below)

World War Two broke out and the market for table grapes was in shambles.  A shortage of pesticides due to the war aggravated this.  Gabriël and Molly worked long hours buying fruit from neighbours and shipping it to the UK and Europe while other farmers realized losses on almost all other types of fruit.
They bought the neighbouring farm, Tevredenheid, in 1949.  The main house (built in 1859) of the farm was known as the Monitor.  It was run as an inn, had stabling for horses and was not sold with the farm.  It was finally reunited with the farm during 2016.  It is called De Vlei Country Inn and is still run as a guest house by Annine, Reynecke’s wife (see website www.devleicountryinn.co.za).

Harry died in 1949 and Gabriël rented the farm from his mother until she died in 1971.  The land was finally transferred into his name in 1975.

Leon studied at Elsenburg agricultural college and joined his father on the farm.  In 1979 he married Madeleine Reynecke and bought the farms De Vlei A and Tevredenheid from his father, De Vlei B, belonging to his uncle, he bought during 1983.  In subsequent years he expanded the farming operation in the Hex Rivier Valley, he also expanded to the Trawal area (1994) and to Noord-Oewer (2012).
(More about the Reynecke family below)

Since 1992 Leon and his brother Anton is farming Heimat in the Piketberg area as a partnership.

Reynecke completed a two your diploma at Elsenburg Agricultural College and also a BCom degree at Stellenbosch University.  He joined the farm at the end of 2007.

Gabriel studied at the University of Stellenbosch, qualified as a chartered accountant and worked in London for a year.  From 2006 to 2015 he was working at Exsa and was doing the finances and reporting of the Exsa group.  He joined De Vlei at the beginning of 2016. 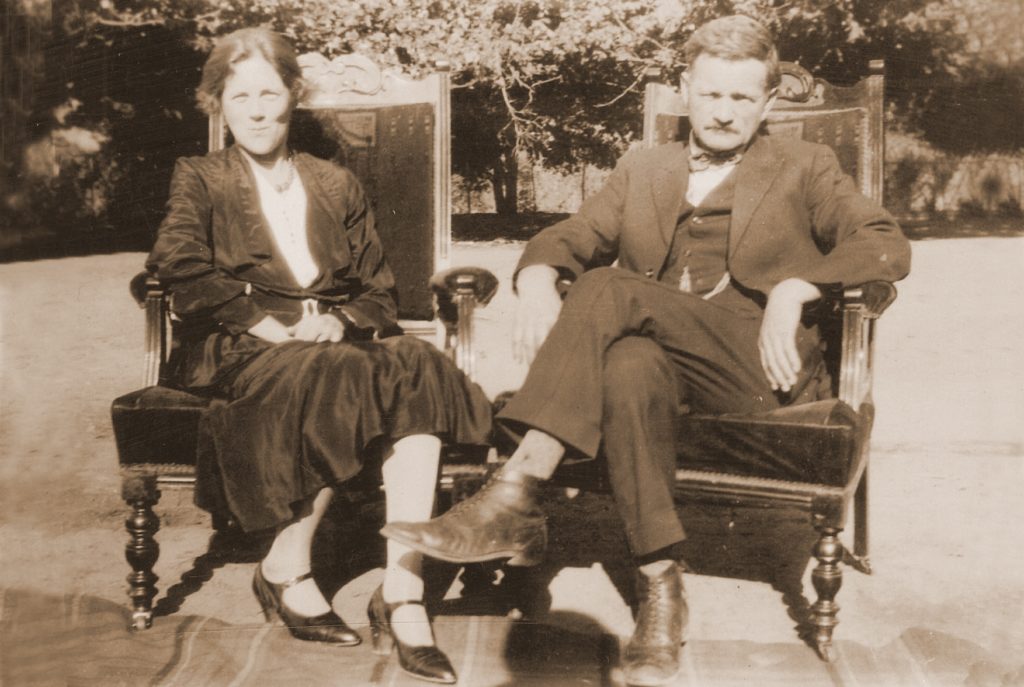 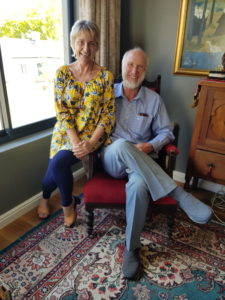 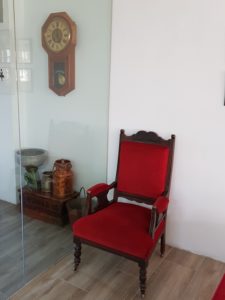 Our great grandparents had a set of armchairs that was split up and ended up with two of our cousins.  At the 2018 Christmas family get together, Jannie decided that his chair should return to the farm and it is now displayed in our office, along with the clock (also belonging to our great grandparents) that was given to us by cousin Ronel at a family reunion held on the farm in 2015.

While we cannot say that we have been farming on the same farm since 1732, we can say that our family has been farming in the Hex River Valley since 1732.  Anton Viljoen, Leon’s brother, bought Werda, part of this Van der Merwe land, in the late 1960’s and has since acquired other farms in the area that were once part of the original Vendutiekraal farm. 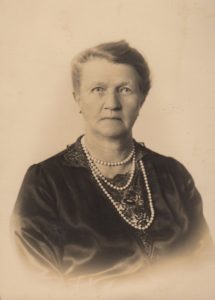 John Dudgeon, of Humbie, (died 25/03/1871, aged 75 years) was a tall, handsome man, well known with the Linlithgow and Stirlingshire hunt.  His wife, Margaret (died 18/12/1885, aged 88 years), was a tiny woman.  In his more expansive moods it was said that he would lift her onto the dinner table to dance among the wine glasses.

1854:  Mr James Lawson, blacksmith in Kirkliston, recalls the first invented reaping machines which were invented by Rev. Mr Naismith ably assisted by his sister who made the canvas work. This first reaper belonged to that highly esteemed and far-famed farmer, Mr John Dudgeon, Almondhill. The first exhibition of this machine at work took place on a glorious autumn day in a nice wheat field at the south of the Main Road. The machine was pushed by means of a long pole on each side of which a horse was harnassed. At the end of this pole, behind the horses, one man was placed, and he guided the action of the reaper, while another man led the horses. The cut grain was rolled off by canvas in a swath, and this was put into sheaves and stacked. This same machine was next tried in a barley field with less success.

A painting (below) was done of John Dudgeon by the Scottish painter Sir John Watson Gordon RA PRSA in 1861.  The inscription reads:  “Presented to John Dudgeon Esq By a large number of Subscribers, in token of their respect for him as a friend and neighbour and their appreciation or his public spirit and eminence as an agriculturist”. 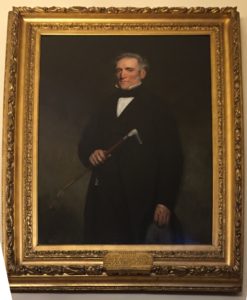 George Dudgeon, the younger son of John Dudgeon, lived on Almond Hill (part of the Dundas Estate).  He was a darling whom all loved.  He married Margaret Brock, a very good and charming woman, and being of a deeply religious nature she had many friends among the great Scottish “Divines” of the day.  It was said that she never had a nasty or unkind thing to say about anybody, and always looked for (and found) the best in people. 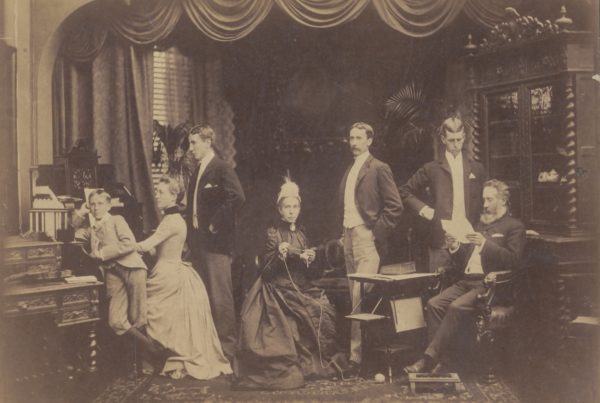 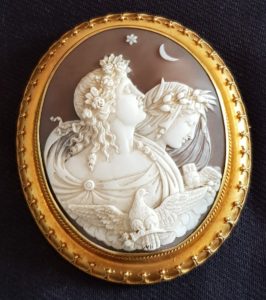 During a 2018 UK visit Margaret Dudgeon’s Cameo was “discovered”

John (called Jack), their eldest son was a bit of a dandy.  His black wavy hair, blue eyes, and long silky moustache were much admired by the ladies.  He was packed off to Canada and then went to South Africa where he enlisted as a trooper and fought in the 1896/1897 Matabele Mashona war in Rhodesia.  He served in The Light Horse brigade during the Boer war of 1899 (he was a member until 1907), was promoted to Lieutenant and received a medal for distinguished conduct in the field for having taken a wounded comrade out of action under perilous circumstances at Joubert’s Kop, near Standerton, in July of 1900.  The Distinguished Conduct Medal (DCM) was conferred on him during a ceremony in Edinburgh on the 6th of March 1902.  (Queen Victoria instituted this medal in 1854, during the Crimean War, to recognize distinguished, gallant and good conduct in the field.  It was the second highest award for gallantry in action after the Victoria Cross.)

The following medals were awarded to J. Dudgeon, No. 1115:
–  As Corporal:  1896 BSA Co Medal with 1897 Clasp (he was with the Matabeleland Relief Force)
–  As Sergeant:  Queens South Africa medal with 7 Clasps (Belfast, Cape Colony, Orange Free State, Tugela Heights, Relief of Ladysmith, Laings Nek, South Africa 1901 (as Lieutenant))
–  As Lieutenant:  Distinguised Conduct Medal awarded in 1901, presented to him at Piershill, Edinburgh on 6 March 1902
(These medals went missing after his death – if you know where they are, please contact us.) 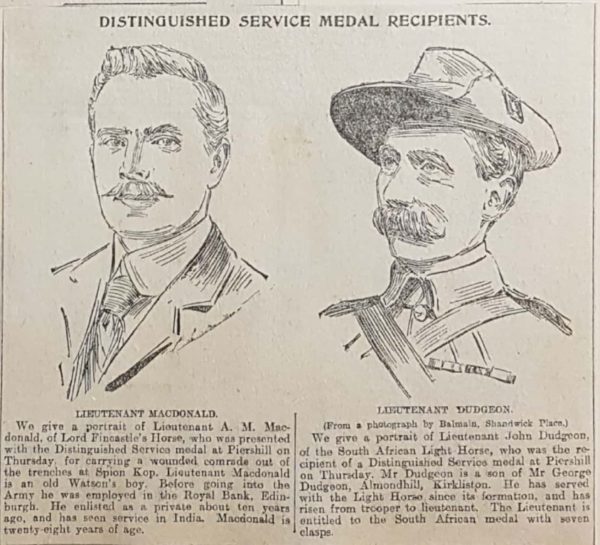 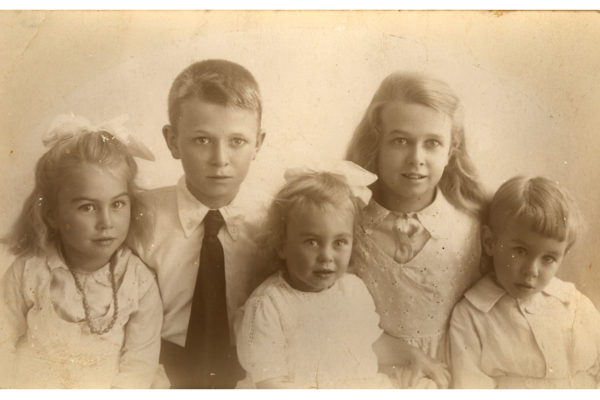 Second son Easton joined the London Stock Exchange, and later became one of the senior partners in the very old established firm of Roger Mortimer & Co.  Like his older brother, he had great charm and social gifts, and was extremely popular with the ladies.  As an attractive bachelor he was much in demand, dined out five nights a week, and often gave dinner parties in his flat the other two evenings.

At the age of 21 Ned went to America where he worked for some time on a ranch in North Dakota.  George was getting old and Ned was sent for to take over the farm.  He made a tremendous success of it and in his capable hands Almond Hill became one of the finest and best run farms in the Lothians.  He hung on to the farm until after his father’s death.  As he always had a hankering for the West country with its greater beauty and softer climate and thought he would like to be near his sister, who lived at Glenbarr Abbey, he gave up Almond Hill and bought Kildalloig farm in 1925.  This he sold in 1942 and then took a house in Edinburgh.

Jim went to London, and under the wing of big brother Easton also joined the Stock Exchange.  He married Gladys Mavourneen Ratliff (daughter of Baron and Baroness Alfred de Turckheim) in 1910 and had four children.

Burgershof Wine Farm, situated in the Klaasvoogds ward, is one of the oldest family-owned wine farms in Robertson in the Western Cape, South Africa.

Alewyn Burger lived on Kruis farm, Montagu.  He bought Burgershof in 1864, after his death in 1870 it is transferred  to his son Jacobus Francois (Koos) Burger. Koos had 20 children (with two wives – thankfully!) 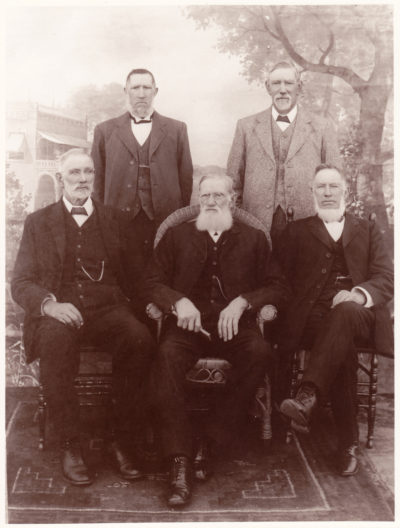 Koos’ son, Paul Jacobus Burger continued the winemaking and farming of Burgershof. Ben Reynecke, Paul’s son-in-law, started his farming career in 1956. Although not from a wine-making background, he won the highest possible award in the wine industry in South Africa in 1976…. the General Smuts Trophy for the best Muscadel in the country. 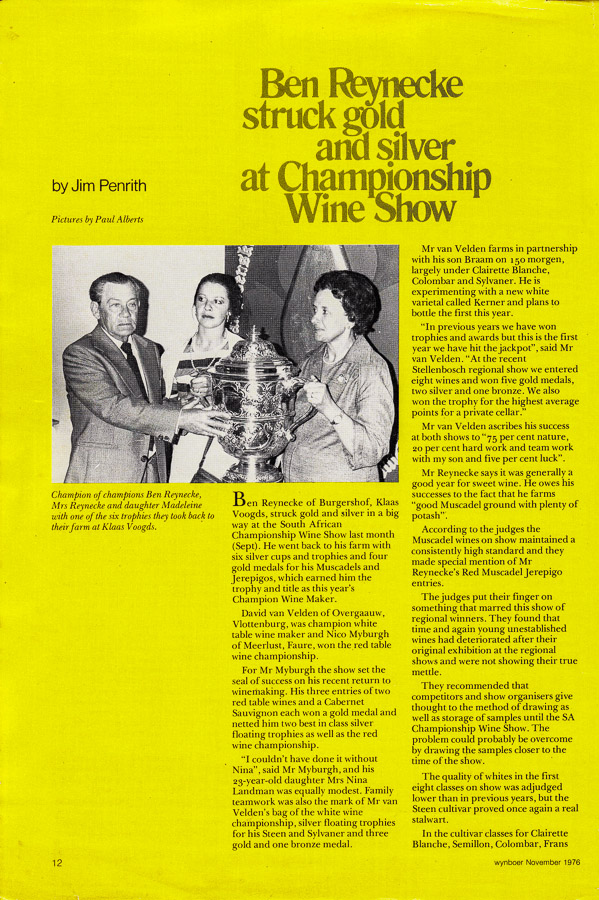 Ben’s eldest son, Hennie Reynecke, took over from his father in 1979, after finishing his diploma in Wine-Making and Cellar Technology at Elsenburg Agricultural College near Stellenbosch. In 1995 Hennie started planting new cultivars like Chardonnay, Sauvignon Blanc, Merlot, Pinotage and Shiraz. Apart from winning many other trophies and accolades for his wines, he was crowned the (double) South African Champion for a Red Muscadel, as well as his Dry Red Blend. 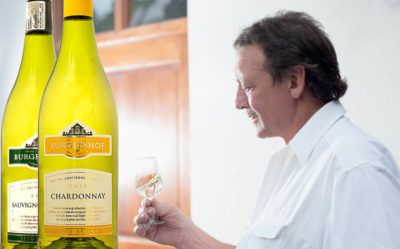